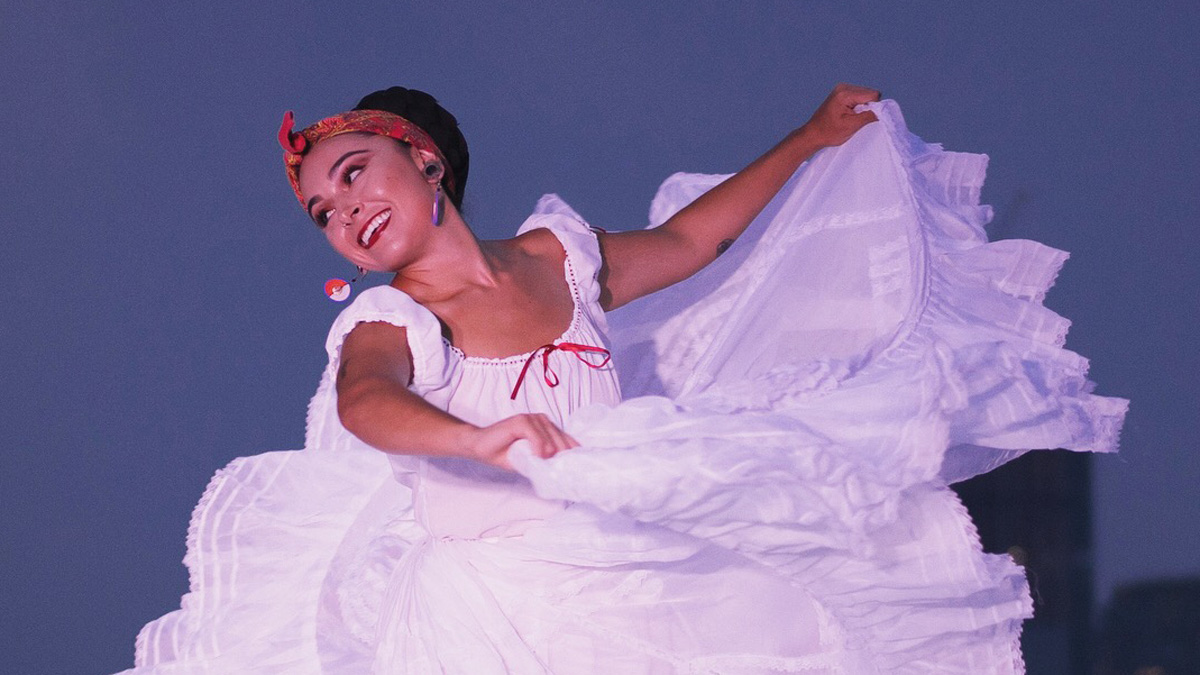 Veracruz is a Latin American gateway for two foreign cultures—the conquering European and the enslaved African—which fused with native indigenous culture to form the state’s unique mestizaje, or mix of races. In Ballet Nepantla’s Coco, you see Nepantla’s interpretation of mestizaje culture through a beautiful fusion of West African dance and Mexican folklórico.

Ballet Nepantla tells stories about Mexican and Mexican-American history and society using contemporary ballet, West African dance and Mexican folklórico. Fusing these styles, Ballet Nepantla expresses the experience of living in the in-between spaces, not only of dance styles but also of different times and cultures.

From the Choreographers
The state of Veracruz is a Latin American gateway for two foreign cultures: the conquering European and the enslaved African. Evident in the mestizaje (the mix of races), it fused a ternary part with native indigenous culture. In Ballet Nepantla’s Coco, you see Nepantla’s interpretation of mestizaje culture (cultural and ethnic blending) through a beautiful fusion of West African dance and Mexican folklórico.

Choreographer Bios
Argelia Arreola is a dancer, instructor and choreographer from Mexico specializing in contemporary, West African and Afro-Cuban dance. Argelia obtained a degree in contemporary dance from the Universidad Veracruzana, Mexico, in 2009. Shortly after, she was a Fellow of the Scenic Creators and Young Creators of the National Fund for Culture and the Arts in Mexico. Argelia was a member of De Paso Grupo Escénico, in San Jose, Costa Rica, 2013. She was dance captain and choreographer for the Ensamble de Percusiones of Xalapa, Mexico, for nine years and professor at the School of Dance at Universidad Veracruzana 2010-2012. Argelia moved to NY in 2014. She is a member of the Afromexican band Jarana Beat and dances and choreographs for Ballet Nepantla.

Martín Rodriguez was born and raised in Guadalajara, Jalisco, Mexico. He began dancing folklórico at age nine at Academia de Danza Imagen, and through his adolescence took classes with various companies throughout Guadalajara. At an early age, he traveled with Academia to rural indigenous areas in Michoacán, Guerrero, Guanajuato, Colima and Jalisco to learn the traditional dances, culture and history of the local people. He later moved to Los Angeles, where in 2006 he joined Grandeza Mexicana Folk Ballet Company under the direction of José Vences and eventually became principal dancer, as well as instructor and choreographer. In 2016 Martín moved to NYC, where he now resides and directs and choreographs for Ballet Nepantla.

Join choreographers Argelia Arreola and Martin Rodriguez, as well as Keerati Jinakuniphat from Chapter 1, as they answer questions about their work submitted by summer camp kids and families watching New Victory Dance.