Storytelling inspiration can come from anywhere—the world around you, the conversations you overhear, even your own memories. In this Arts Break we’ll explore the art of storytelling through spontaneous games the whole family can gather to enjoy, from your cousins around the dinner table to your grandparents in the living room. Ready, set, story! 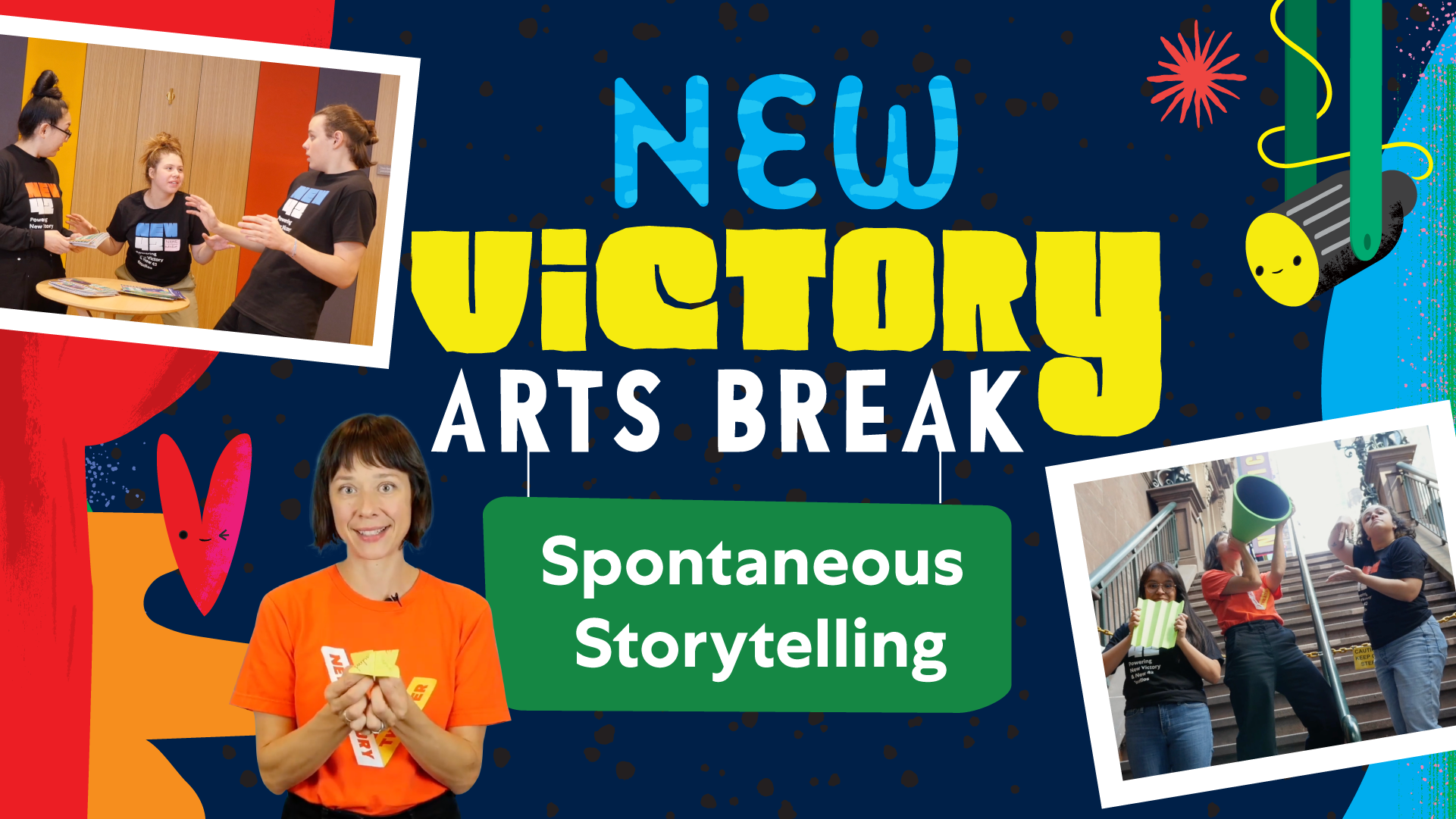 When you create a story from scratch, sometimes it’s helpful to have specific boundaries to play within. This can make it more fun and accessible for you and your audience. But how can we stay specific while keeping the storytelling spontaneous? Let’s figure it out together in a game we call Storytelling Surprise!

Materials: A piece of paper and something fun to write with, or you can use our Storytelling Surprise template!

Step Two: We’re going to brainstorm ideas for a story in four specific categories or acts.

Brainstorm three or four possible examples for each act and write them down. You’re not connecting ideas together into a single story yet. In fact, the more disconnected or random your choices are, the more amusing your final story will be! Here are some examples we chose for each act: 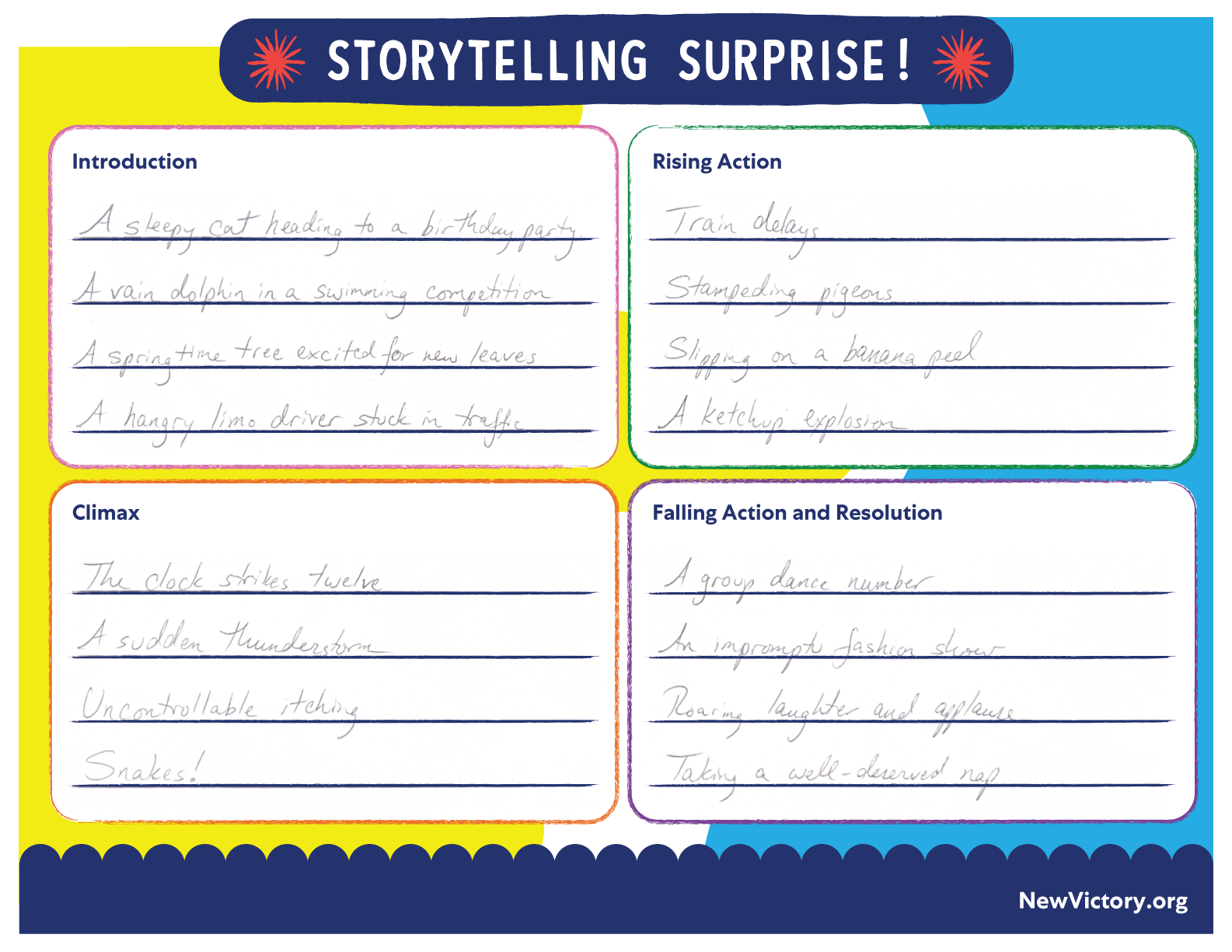 Step Three: Create your surprise story! The writer should use a pen or pencil to tap each example in the first act, cycling through the list one item at a time, over and over. When the performer says “Stop!” wherever the pencil lands becomes the choice for that act of your story. Circle it and move on to the next act until all four are completed.

Step Four: Now it’s time for the performer to act out their chosen story! Arty, Aleks and Mana from the New 42 Youth Corps created a surprise story about two ushers encountering Mrs. Leslie Carter, the ghost who haunts the New Victory Theater!

How did it go?! Were you able to get through each act and tell your story? How did each act fit together?

A little bit of planning plus some playful randomness can result in a one-of-a-kind performance! Let’s apply this principle to a more advanced form of storytelling. Follow along with theatermaker and New Victory Teaching Artist Lauren Sharpe as she approaches the enigmatic and task-based world of performance art through play, using a special device you have seen before!

Lauren used a decider (sometimes called a fortune teller) to introduce the element of play into her and her friends’ performance art happenings. To create your own performance art decider, grab a piece of paper and follow along with Emily from Inner Child Fun.

On the inside of your decider’s flaps, write down eight different options for your performance. You can create your own or use the bank below for inspiration. If you start running out of space when writing, feel free to reduce your ideas to just a few keywords!

Great work! Now you are ready to use this special decider to create a spontaneous piece of playful performance art just like Lauren, Siobhan and Melissa.

There are stories that we tell over and over and that never get old. Even when everyone knows how the story ends, the fun is in the telling! In this next activity, we’ll focus on shared memories and how we can dramatize them with family and friends.

Step One: On small pieces of paper, write down specific memories you have with your family and friends. For example:

Step Two: Fold up your papers and place them in a bowl or hat in the center of the room.

Step Three: One at a time, come up to your performance space and take one piece of paper. In the span of 15 seconds, act out what you see on the paper. Add dialogue, and physicalize the memory in as serious or silly a way as you want! If you’re in the audience during the performance, guess what memory is being performed.

Challenge: Can you try to perform the memories without speaking? Here’s Arty acting out the time he, Mana and Aleks all played the game “Mafia.”

We hope you’ve enjoyed adding the sparkle of spontaneity and the festivity of family games to your storytelling in this Arts Break. Keep sharing those stories, and remember that, if you’re having fun, your audience will have fun, too!