In their theatrical adaptation of the illustrated books by Mo Willems, Manual Cinema uses puppets of all shapes and sizes to tell the story of Leonardo! A Wonderful Show About a Terrible Monster. In particular, they created hundreds of two-dimensional paper puppets to bring the characters of Leonardo, Sam, Kerry and Frankenthaler to life! This week, we’ll create some paper puppets of our own and see what sorts of adventures await them. 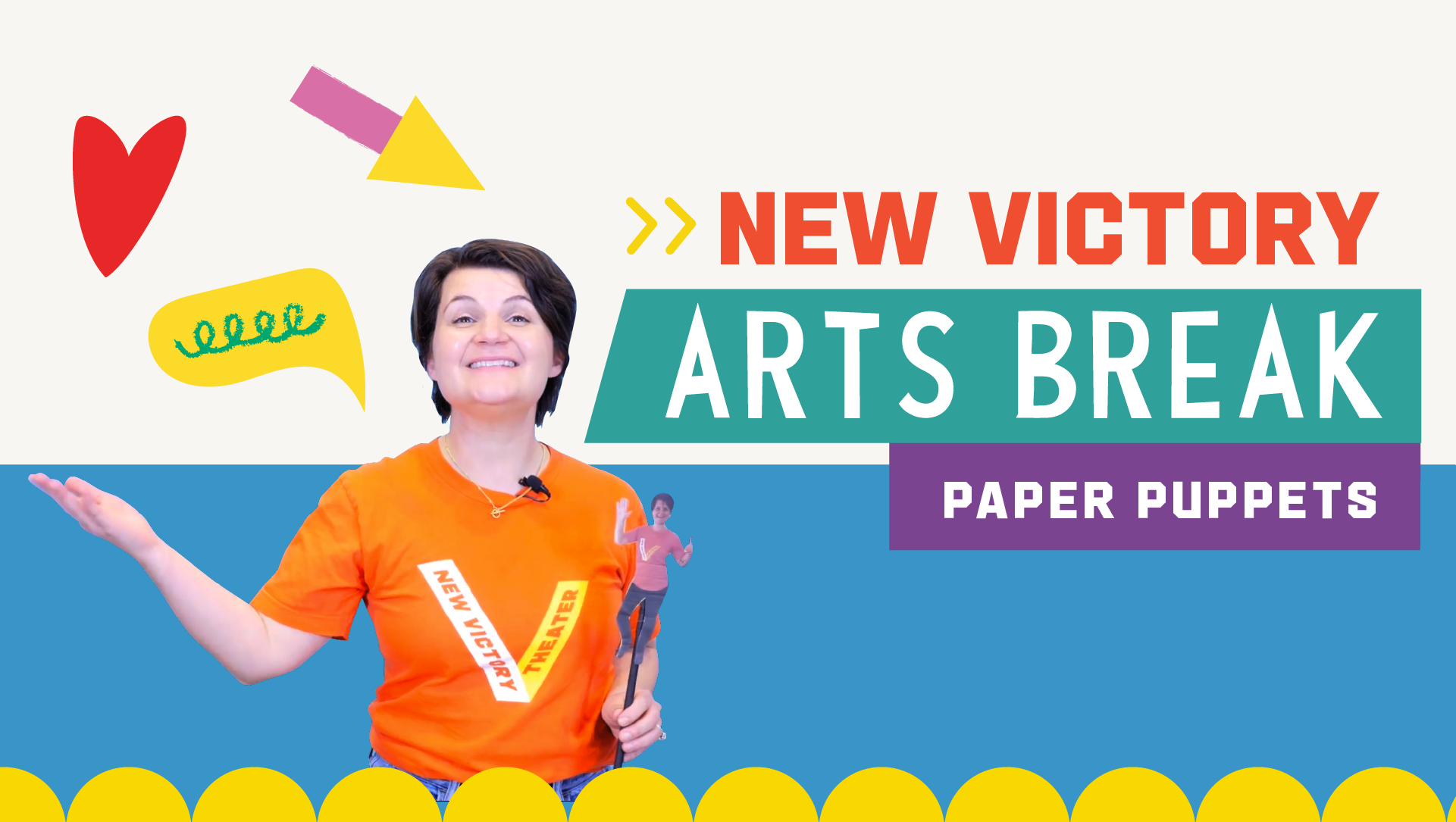 Anything can be a puppet, including you! Follow along with Teaching Artist Renata Melillo Townsend as she uses a few simple materials to create a tiny paper puppet version of herself.

Materials: Paper, scissors, markers, cardboard or sturdy paper (like a cereal box), glue or tape, a dowel or chopstick

Step One: Print out a picture of yourself or doodle a version of yourself on a blank sheet of paper. Whether you’re drawing or using a photo, try to capture your whole body—you don’t want your puppet to be just a head!

Step Two: Cut out your tiny self and trace its shape onto a piece of cardboard or study paper. This will serve as a backing to keep your puppet from flopping over. Cut that out as well and glue or tape the two together.

Step Three: Finally, tape a dowel or a chopstick to the back of your puppet self. Ta-dah! Now you can go on all kinds of puppet adventures. 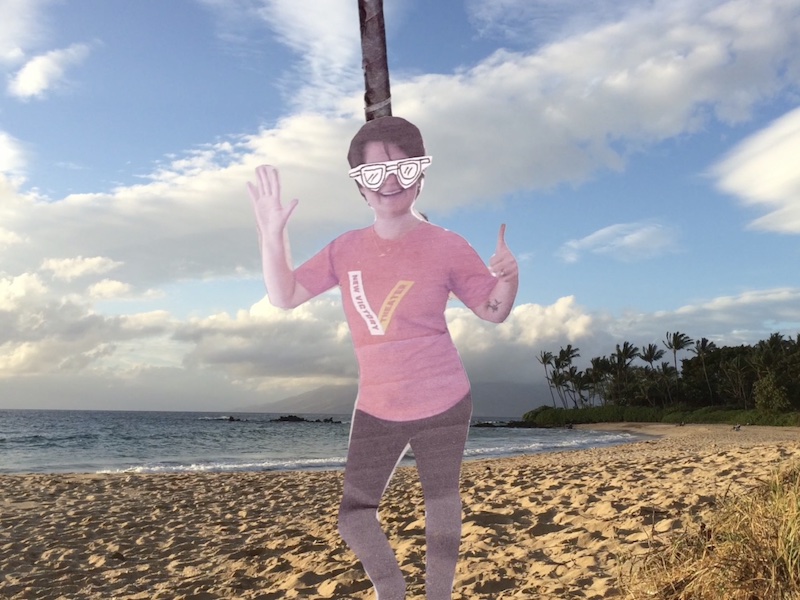 We all feel big feelings sometimes, so why shouldn’t our puppet selves feel those same feelings? Let’s play with expressing our feelings by creating more paper puppets depicting different emotions.

Step One: Look in the mirror and practice some extreme faces you might make if you were feeling the emotions below. To make an extreme face, just turn up the volume on your normal face for each emotion. Bigger smile! Wider eyes! Higher brows!

Step Two: Once you’ve perfected your extreme emotional faces, it’s time to make more paper puppets. You could draw new puppets based on your faces, or take selfies for each one and print them out. Mana from the New 42 Youth Corps created puppet versions of herself feeling excited, angry and scared! 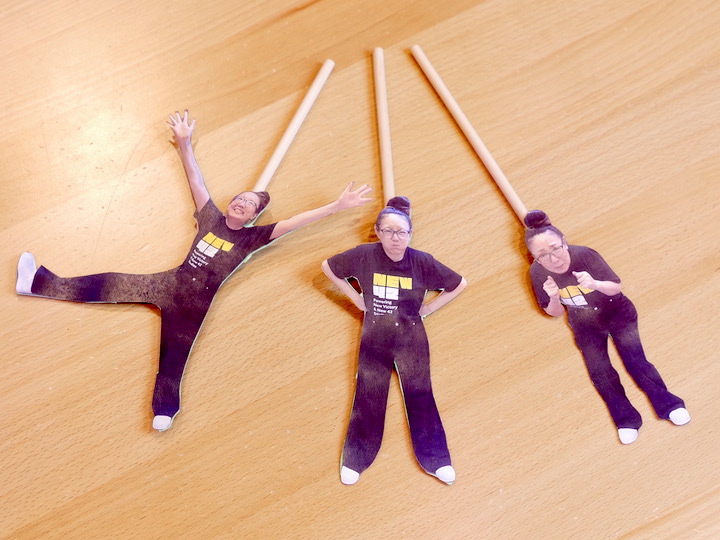 Step Three: Let’s practice expressing our puppet’s emotions. Print out the scene below, or draw your own. Make sure it contains a series of obstacles for your puppet to encounter and react to. 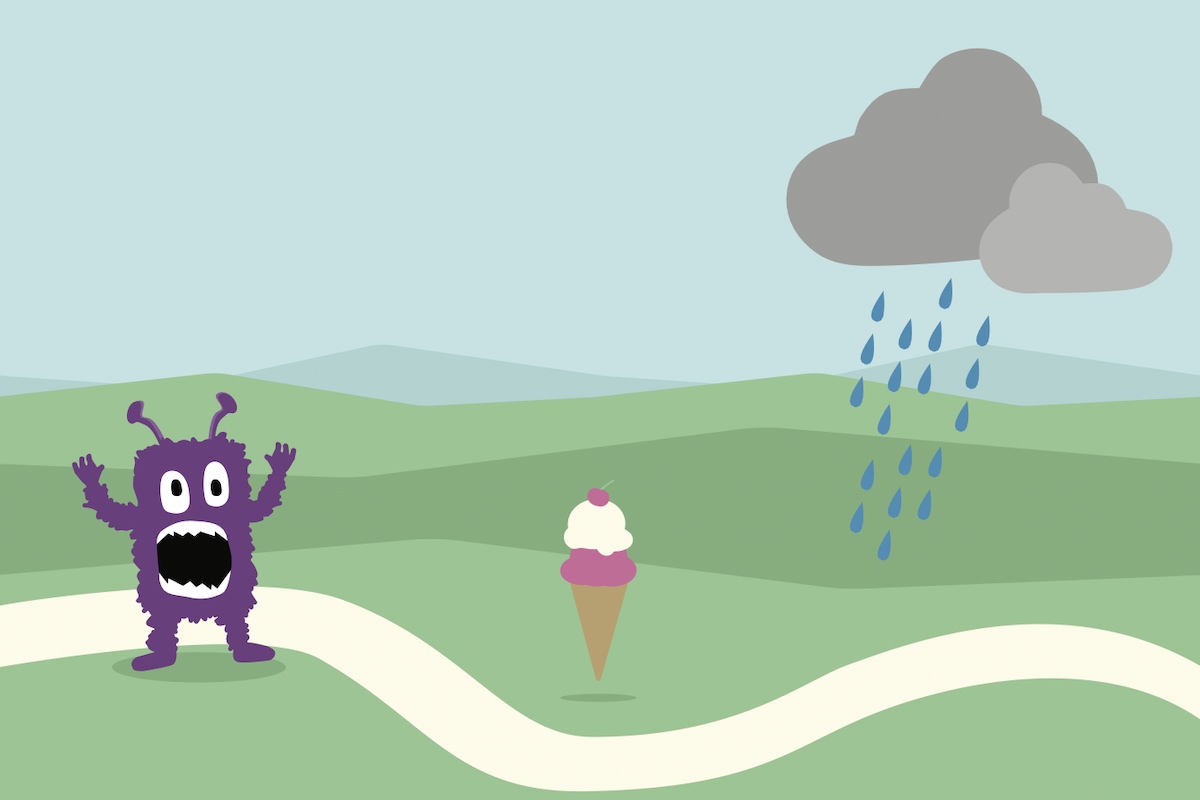 Step Four: March your puppet across the scene from left to right, and switch from one emotion puppet to the next as you react to the obstacles along the way. With help from her friend and fellow Youth Corps member Keyleen, Mana drew a scene featuring a friendly monster, a ghost and a downpour, and she reacted to them using all three of her puppets.

Try drawing more scenes containing different obstacles, or break into the third dimension and have your puppet react to things around your house! If you’re looking to simplify this activity, follow along with Teacher Belle’s crafting tutorial that uses cutout emojis as the basis for emotion puppets.

Now that you have a series of paper puppets, it’s time to go on some adventures! With a little imagination and some drawing supplies, let’s create a series of scenes for your puppet to journey through.

Step One: Think of the adventure you and your puppet want to go on. Where will your puppet go, and how will they get there? A trip to the library on foot? A ride to the park by bike? What might happen along the way, and what will they do once they arrive? Mana’s puppet will be taking the train to the theater to see a show.

Step Two: Think of three main locations for your adventure and draw them on separate sheets of paper. These will be the backgrounds for the beginning, middle and end of your story. For Mana’s journey to the theater, she and Keyleen chose to start by drawing her apartment, then the train ride and finally the theater itself.

Step Three: On a separate sheet of paper draw some additional items that you can puppeteer into your scene. These could be other characters, or props that help tell the story. Mana’s story includes her cats and her theater ticket!

Step Four: Now it is time to activate your puppet’s adventure. Use your puppet, its different emotions and each background, along with any props or other characters you created, to bring the journey to life. Try adding dialogue or sound effects to each scene to tell your story to its fullest.

BONUS: Make your very own paper puppet animation! Follow along with this stop motion tutorial from the Salinas Public Library in California, which uses some of the same materials and puppetry techniques you’ve practiced today.

Have fun designing and performing new adventures with your puppet, and join us next time as we draw and act out scenes inspired by the storytelling magic of comic books.