Skip to content
Stories Home » Family Engagement » Around the World in 80 Days Family Activity
Posted May 8, 2019

Around the World in 80 Days Family Activity

In Around the World in 80 Days, Phileas Fogg and his silly sidekick, Passepartout, depart the misty streets of Victorian London to circumnavigate the globe in just eighty days. If they fail, they lose everything! They race around the world riding on elephants, steamer ships and transcontinental railroads. In this Family Activity, follow Phileas Fogg’s journey, figure out what you would bring on an adventure and turn an ordinary box into something extraordinary!

In this show, Phileas Fogg and Passepartout make the journey from London to the Suez, then to Bombay and Calcutta, down to Hong Kong, over to Yokohama, all the way to San Francisco, across to New York and then back to London! Check out their journey on the map below:

Now, turn this map into a game for the whole family!

Step One: Write the names of each destination (listed below) on individual sheets of paper with arrows pointing to the right. Arrange the destinations in a circle in the following order with the arrows pointing in a clockwise direction. 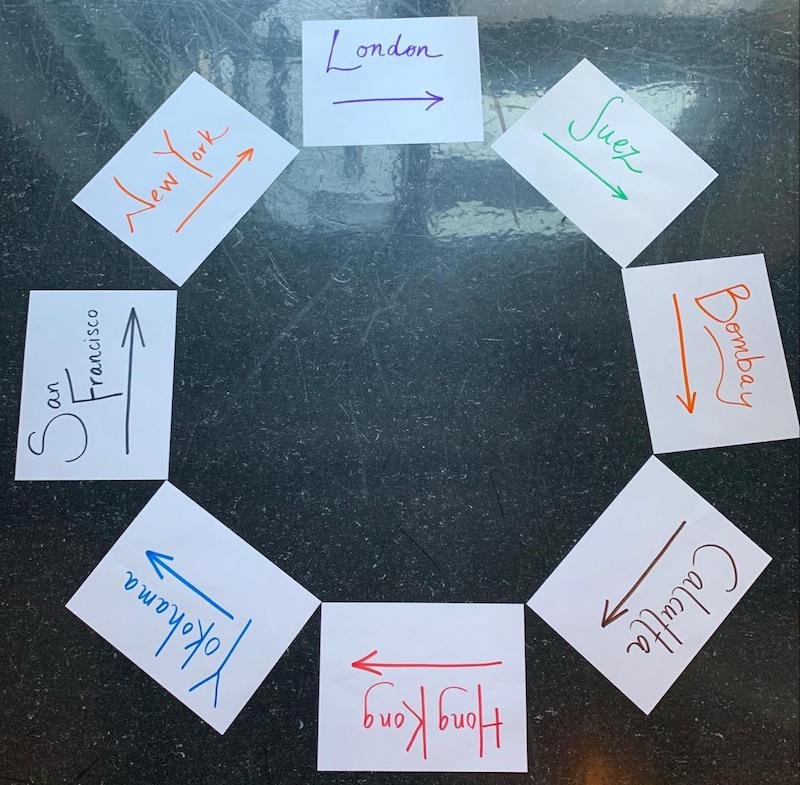 Step Two: Once this is laid out on the ground, have everyone select a small to midsize item from home that they would take on a journey around the world. It could be useful (like a fork or a flashlight) or it could be fun (like a stuffed animal or small houseplant). These are your game pieces. Once they’re selected, place them all on or near London.

Step Three: Play the game! To advance a game piece around the world, a player must win a transportation stand-off with the person to the right. A transportation standoff is like Rock-Paper-Scissors, but using an Around the World in 80 Days: steamboat, elephant and railroad. See how to physicalize them below. 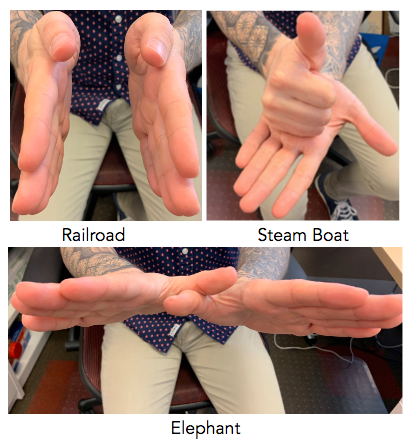 Railroad—Hold your hands palm to palm, with about three inches in between them.

Steam Boat—Make a “thumbs up” sign and place it on your upturned palm.

Elephant—With your palms facing away, link your thumbs and extend your fingers, mimicking elephant ears.

First, have the two players face off and say “3 – 2 – 1 – Go!” On “Go,” they must reveal their transportation signs! The winner advances and the loser must stay where they are. Elephant beats railroad, railroad beats steamboat and steamboat beats elephant.

Step Four: The first person who makes it all the way around the world and back to London will win the game IF they correctly answer a transportation-trivia question. The player can chose to answer a question about elephants, railroads or steamboats. If they answer correctly, they win! If they answer incorrectly they return to New York to try again on their next turn.

We’ve provided some sample questions below (the answers are on the very last page of the activity), but feel free to come up with your own!

Phileas Fogg and Passepartout have to pack for eighty days of world travel. As you journey to New Vic to see the show, use this fun alphabet game to brainstorm what you would bring on such an incredible adventure!

In order from youngest to oldest, you and your traveling companions will make a list of what you might bring on a trip around the world. The catch is that you must do it in alphabetical order, and you must remember and restate each list item before adding the next! Keep going until your traveling troupe gets to the letter Z.

Use this example video as inspiration for your packing list!

Now that you’ve watched the show, here are some questions to think about.

In Around the World in 80 Days, you saw trunks and suitcases and other everyday objects become elephants, train cars, steamboats and more! Now, it’s your turn to transform an everyday object into a series of adventurous events and happenings.

Step One: Find a box in your home and gather a group to play this game.

Step Two: Choose one person to be the first adventurer. They must use physical movement and word-less sounds to transform the box into another object. They can choose whatever they want—the wilder the better. Could you make the trunk into:

Step Four: Play as many rounds as you like! Try adding variations, such as making the objects very specific—like a bicycle made of cotton candy that only drives in circles.