Welcome aboard, friends! We have flown from Australia all the way to South America. This season, we’re visiting artists from all around the world to get to know their craft and their home! As we explore South America, you might remember a few companies from their time at the New Victory. Let’s discover what these artists have been dreaming up this year, then get to know the incredible continent of South America! Let’s go! 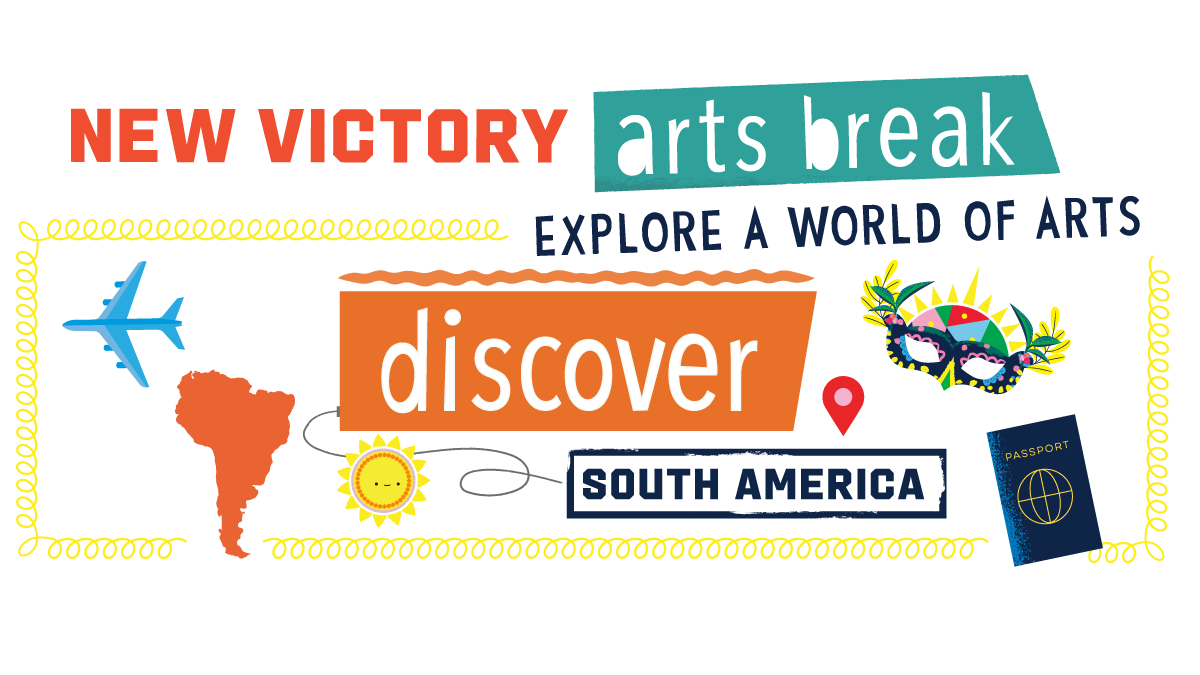 Let’s explore the performing arts in South America! South America is made up of 12 countries and each is filled with all different cultures, foods, traditions and art forms. We are highlighting puppeteers, visual artists and circus arts from these regions. Here are just a few of the awesome artists flexing their creativity down in South America:

There are so many South American artists making incredible work. Let’s zoom in on one company in particular from Argentina—Brenda Angiel Aerial Dance Company. They were seen on the New Victory stage in 2011 for their show 8cho, which was all about Aerial Tango. We will learn more about their aerial work later this month, but to start, let’s meet Brenda, explore her neighborhood and see what art she has been creating during quarantine.

Now, let’s reflect with your New Victory Notebook. Jot down what you noticed!

Brenda Angiel and her company defy gravity with their aerial elegance. While in isolation, Brenda has explored ways to continue that in more confined spaces—like her patio! Let’s explore using different camera angles to create our own gravity-defying illusions inspired by Brenda’s work. These illusions play with perspective, which is our point of view or the specific way we look at things. Follow Teaching Artist Gyana Mella to learn the tricks of the perspective trade.

Climb a mountain! Walk on your hands! Anything is possible (with just a little movie magic)! Follow the steps below to create your own perspective videos just like Gyana’s.

Step One: Place your phone (or another video device) horizontally on the floor. If you need to use an adult’s phone, remember to ask for permission first! Make sure it’s far enough away for your whole body to be in the camera frame, and that you have enough space to enter and exit the frame.

Step Two: Before you hit record, practice the rock-climbing skills you saw Gyana try out in the video, like:

Step Three: Go out of frame, press record, and then film your death-defying climb.

Step Four: Watch your illusion come to life! Record a few takes until you have the version you like best. Then, rotate the video to see the illusion in full force! Here’s how:

Step One: Set up your phone very far away. You should be able to completely fit in the shot with your hands “touching” the top of the frame. Remember, you’re convincing people that you are a handstand expert!

Tip: Hit record and film yourself from different distances. Once you find the perfect spot, mark it with a piece of tape so you can remember where to (hand) stand!

Step Two: Reach your hands up high and lay them flat on the “floor.” Try walking across from left to right “on your hands.” Remember that you should be working hard to do this handstand.

Step Three: Have someone take a photo of you and/or hit record create the scene just like Gyana did.

BONUS: Are there other fun gravity-defying optical illusions you can capture on camera? Come up with your own creations! Don’t forget to share it with your friends and family, or with us on Instagram @NewVictoryTheater.

South America is home to 12 countries, three territories, and dozens of languages, cuisines, animals and cultures. This continent is home to famous cities such as Rio de Janeiro in Brazil and Bogotá in Colombia, and historical and natural wonders like Machu Picchu in Peru and Iguaçu Falls in Argentina. Use these helpful resources to learn more about the world of South America:

Quiz time! Can you identify all the countries in South America? Click the image below for a fun game to see how many you can name! 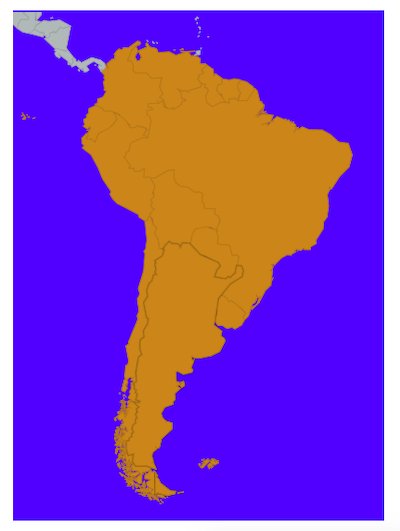 Now, let’s zoom in a little closer to Brenda’s home of Argentina. You may have heard of the music of tango or their many, many bookstores, but there’s always more to learn!

Ready to zoom in even further? Let’s check out the capital city of Buenos Aires! It’s filled with beautiful architecture and skyscrapers and is often called the “Paris of Argentina.” Check out this video to learn more about Buenos Aires.

Get inspired by pictures of La Boca, the famed colorful neighborhood in Buenos Aires, for our next activity. 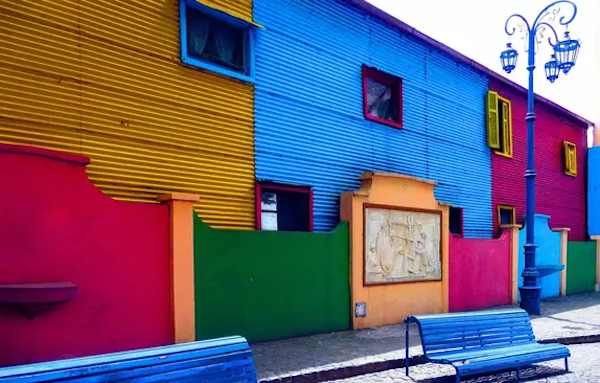 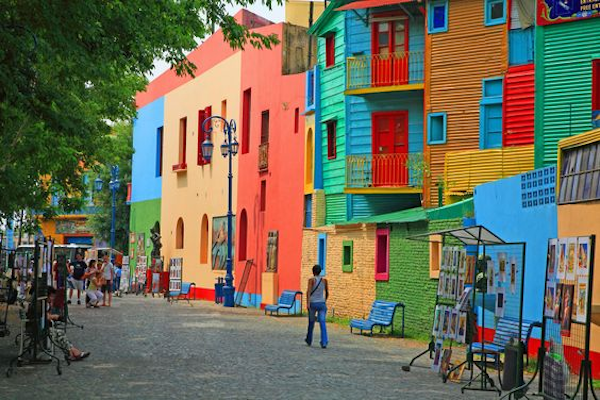 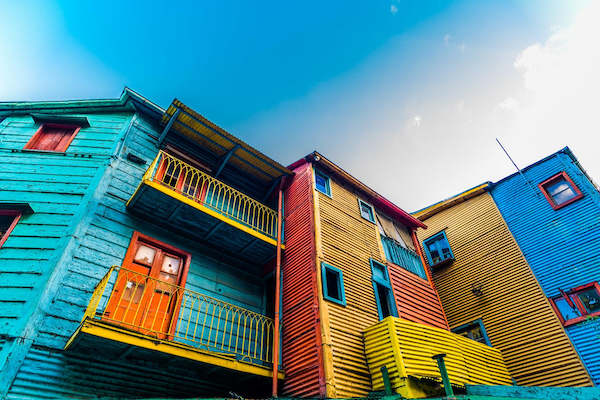 Grab your New Victory Notebook—it’s time to get in touch with the hustle and bustle of this famous city, filled with beautiful shapes and colors. Draw your own building filled with vibrant and various hues!

Materials: Paper (your New Victory Notebook works perfectly!), anything colorful you’d like to draw with

Step One: Draw a building inspired by the colorful buildings in Buenos Aires (or a whole block!). Make sure to leave big windows to add neighbors later on. Be bold with your shapes, patterns, and bright colors. Here is an example: 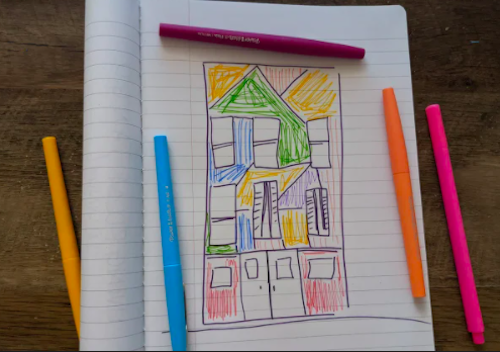 Now, just like Brenda introduced us to her neighbors, it’s time for you to introduce us to yours! Think:

Once you have your neighbors in mind, draw them into your building windows! Try to personalize it—maybe draw them drinking their favorite drink or dancing to their favorite song. Here is our example: 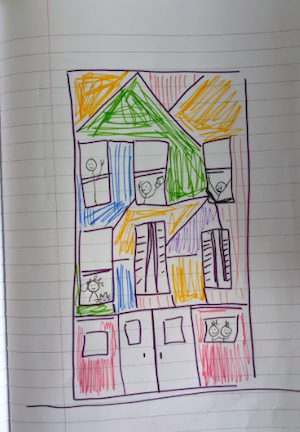 BONUS: Now it is time to combine our explorations from today – let’s learn some perspective drawing skills so we can draw our city block with new depth and dazzling detail!

Thanks for discovering alongside us during our Week 1 adventures. Come back for Week 2 to learn more about South America and how Brenda Angiel and her company creates theater.