We launched the New Victory Usher Corps the day the theater opened in 1995 to provide paid employment, job training, academic support, mentorship and an introduction to the performing arts for over 50 young New Yorkers each year. Since then, the program has provided over 400,000 hours of paid employment to over 660 NYC teens from across the city. Although there are currently no shows on our stage, we are committed to providing employment and professional development to those in the program.

All season long, we featured young people from the Usher Corps in our show programs and here on New Victory Stories. Unfortunately, the season ended before Third-Year Usher Leilani Serrano got a chance in the spotlight. Today, we’re talking to this Manhattan native about her time with New Victory and her favorite hobby—drawing! 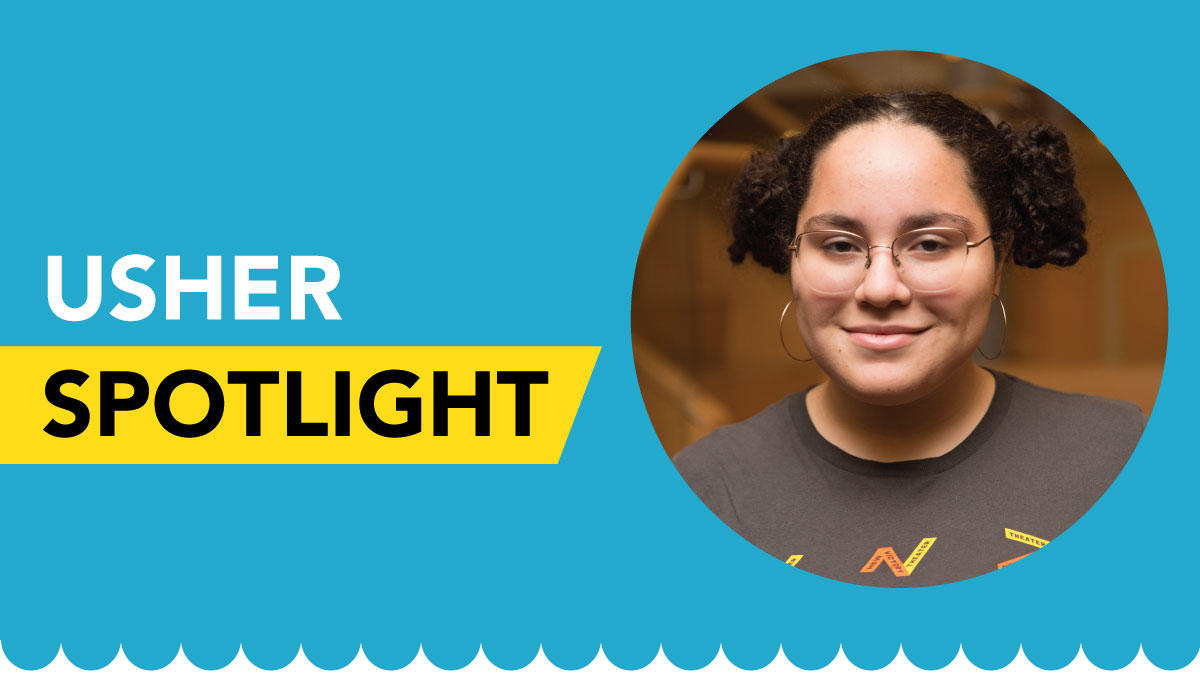 If you could make a show for the New Victory stage what would it be?

I would make a really cute puppet show that talks about heavier topics, like global warming, mental illness, discrimination—all of it. If you introduce these issues to kids at a young age in an interesting way, they could learn even more as they grow up by using the knowledge they gained from the show.

What creative role would you take on in the show of your dreams?

I love creating characters and new worlds, so I would want to be the designer of the show!

What artistic pursuits do you have?

I studied animation for three years in high school, along with illustration and writing. Sometimes it feels like I can’t stop creating things! I love coming up with characters and stories that people love to look at and hear more about.

I’ve been drawing since I was little! My dad is an artist as well, but we work in different mediums. I grew up with a lot of animation and video games so I developed my own style from that and kept going from there.

What first inspired you to start drawing New Victory shows?

The first show I drew for was Beauty and the Beast (2018). I loved the show and the actors were so nice and I wanted to give the cast a gift for their last performance. Drawing the characters was a lot of fun and the performers were really touched! After that, I started drawing my favorite shows. I love seeing the performers’ reactions when I give them drawings to them!

What is your favorite thing about working at the New Victory?

I love that I get to come to work and know that I’m in a safe and accepting environment. I know I’m going to have a good time, and if things go wrong my fellow ushers are there to support me.

What has been your favorite show at New Victory?

I really loved Tinga Tinga Tales from the 2018-19 Season. The show was so colorful and all the songs were so catchy—I still catch myself singing the opening sometimes!

What is your dream job?

I want to be an animated character designer. Character design is something I’m very good at so if I can do that for a living I’d be very happy.

Jim Henson and Tim Burton—their styles are different but both are so creative!

What’s your favorite thing to do when you’re not at work?

I love hanging out with friends around Union Square—it’s where we always end up hanging out even if we don’t mean to go there. I like looking at all the stores even if I don’t buy anything. If I’m alone I like to draw, watch Netflix or play video games.