Laura Galindo can’t wait to dive into New Victory LabWorks and create her own new work for young audiences. Get to know Laura, her project and her creative process! 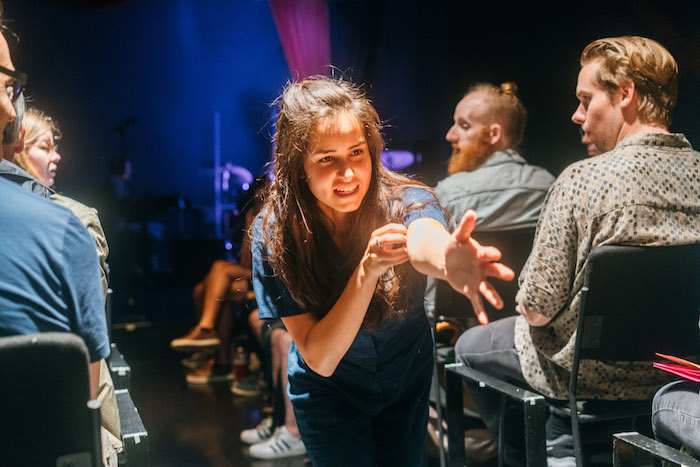 What project are you working on?

How did you first fall in love with theater?

For my third-grade talent show, I wanted to sing “We’re All in This Together” from High School Musical. Turns out two other boys wanted to as well, so they made us go up and sing it together. I clearly recall the moment when the audience started to disengage. So, in a quite innocent and still slightly egocentric moment, I jumped forward and started break-dancing. For context, I’d never break-danced before, not even in private. But as soon as I did, I noticed the audience began cheering and becoming engaged again. I was no good at it, but the audience didn’t care. They were just excited to see someone follow a feeling. I still look up to the little girl who could dance like that, because she was so in touch with what it meant to be alive on stage. I think that feeling, that instinct, is what made me fall in love with theater.

What do you most hope to gain from your New Victory LabWorks experience?

I started working on Annie a year ago and it’s changed shape so many times that I can barely recognize it. One of the awesome parts of the LabWorks residency is that I can spend the whole year checking in on script and music developments through a series of meetings. Then finally, in May or June of 2020, I’ll get to be in a room and chisel out the shape of the show. I hope to gain a fuller understanding of what it means physically so that nothing remains abstract in my mind.

What is your favorite part of your creative process and why?

I love the moment when I’m in the middle of writing a song or a scene and I feel like I’m on fire. Where, with every line I write, I think, “Oh yeees! You’re a genius!” Of course, that’s part of the high of writing and often I look back later and it’s nowhere near as good as I remembered it to be. But I feel like that’s always what I’m chasing as an artist—that tiny thought that I might be onto something bigger than myself.

What excites you about creating work for family audiences?

I recently performed a pared-down version of the show at BarnArts in Maine—it was only about 20 people in a small barn and only one other member of my band (compared to the usual set of five musicians total). There was no fancy design, just some Christmas lights and lighting gels. And yet, it was perhaps the clearest I’ve ever felt the show to be. Most of the audience was either much older or much younger than the millennial New York City crowd—I had no idea how the show would sit with a more age-diverse audience.

What excites me is the thought that there is so much I don’t understand about what I’ve made until I can see it through someone else’s eyes. Annie Aspen’s Musical Space Spectacular! deals with aging and growing up and I’ve begun to realize that all of us are dealing with these themes. I want a fourth-grader, a college freshman, a 30-something professional and a grandparent to all see my very personal show and feel that it’s just as much theirs as it is mine.

What three things would you bring with you if you were stranded on a deserted island?

A knife, matches and a water purifier. Unless this desert island is already equipped with all my survival needs, then I’d just bring my guitar (so I don’t get bored), my film camera (so I can document my fun little rustic vacation) and a really large amount of guacamole (because I think I read somewhere that you could just live off of avocados, so practical and yummy).

Tell us one fun fact about yourself!

I don’t know if this is a fun fact, but I just graduated from NYU Drama in May, so I’m sort of floating through the universe of significance and structure right now, à la Sandra Bullock in Gravity!