Riddle of the Trilobites Family Activity

Riddle of the Trilobites takes us back 500 million years ago with a story of bravery and problem-solving when a young trilobite named Aphra saves species from destruction. In this activity, bring prehistoric puppets to life, solve some riddles and make resolutions to save endangered animals.

Even though these creatures have been extinct for hundreds of millions of years, anything can be brought back to life through imagination and puppetry. In Riddle of the Trilobites, these creatures are made to be more like humans through personification, or giving human characteristics to nonhumans, like trilobites! Here, you’ll create a new non-human puppet and personify it.

Step One: Watch this video to visualize how the Earth looked during the Cambrian Period, the time when our show takes place! Then, read about these four other creatures that were alive during this time- from 541 to 485 million years ago.

Anomalocaris (pronounced Ah-nom-a-lo-CAR-is): Trilobites had to watch their shells when these fearsome creatures came around! Their mouths, lined with hooks, were perfectly designed to trap their delicious prehistoric prey.

Opabinia (pronounced OH-pa-BIN-ya): These creatures had one, two, three, four, FIVE eyes! Using the ultra-flexible, clawed arm attached to their heads, they caught and feasted on their victims.

Pikaia (pronounced Pick-ay-uh): Humans have spinal cords, and so do pikaia! These are the first creatures scientists think share this super important human trait. So…pikaia are (very, very) old ancestors of humans!

If you want to take a deeper dive into any of these creatures, look at an Encyclopedia, like Encyclopedia Britannica.

Step Two: Choose which Cambrian organism you’d most like to make into a puppet! Print out the template, then color and cut out your creature of choice. Then, attach a popsicle stick to easily move your puppet.

BONUS: Make all of the creatures into puppets. Then, you’ll have a whole family of prehistoric puppets just waiting to come to life!

Step Three: Give your new puppet a personality. Some questions you can ask are:

Feel free to research your creature so you can figure out how to best personify them! However, keep in mind that it’s always fun to be creative and invent a character from scratch.

Step Four: As a family, get ready to make up your own original adventure story! Answer the following questions together:

Step Five: Answer these additional questions to create an even more detailed piece of puppet theater:

Using your puppets, act out your story for your family!

First, explore the arc of your original story with this worksheet. Then, see if you can identify each of these steps when you see Riddle of the Trilobites. 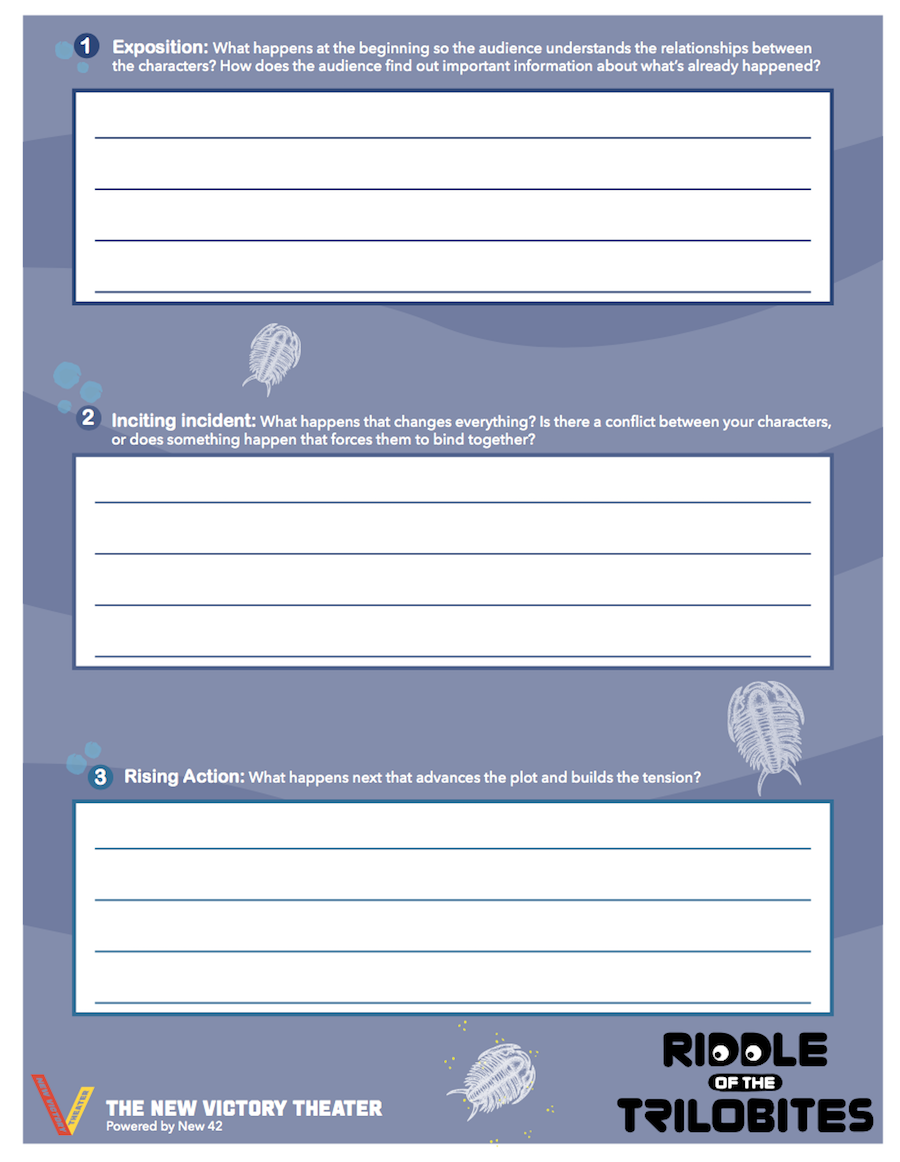 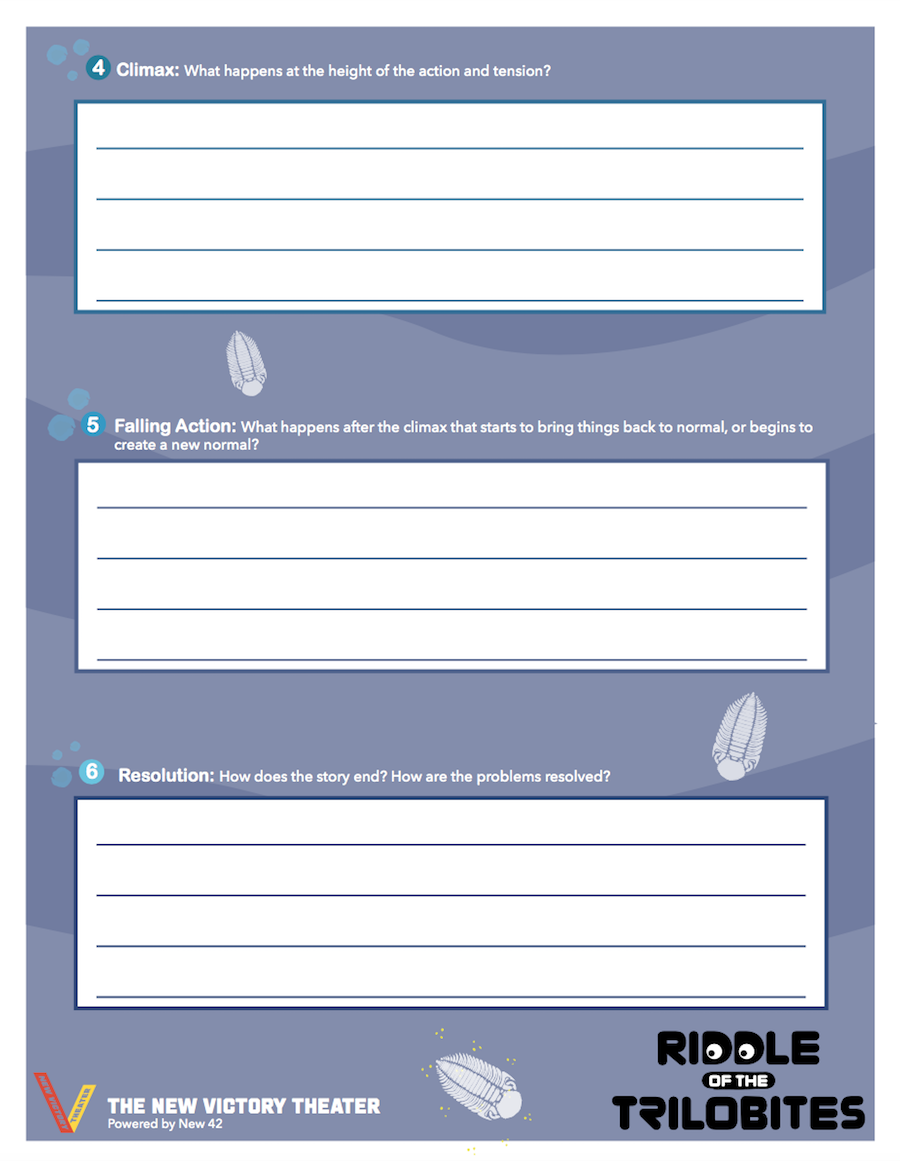 In Riddle of the Trilobites, Aphra will go on quite a journey to solve a riddle. To get you in the riddle-solving mood, try your hand at solving some of the puzzles in this video. After the riddle comes up, you’ll have a few seconds to try to solve it before a clue appears! Then, you’ll have a few more seconds before the answer is revealed.

After seeing the show, reflect on a few of these questions.

Trilobites existed during the Cambrian era, which extends from 541 million years ago to 485 million years ago. This was an important era because many new life forms developed during this time. The climate got warmer than it ever had before, and the melting ice eroded (or broke down) rocks. The additional rock debris and the melting ice completely changed the chemical composition of the ocean. Most notably, there was more oxygen in the water, meaning that that new forms of life were able to develop in the Cambrian Explosion! 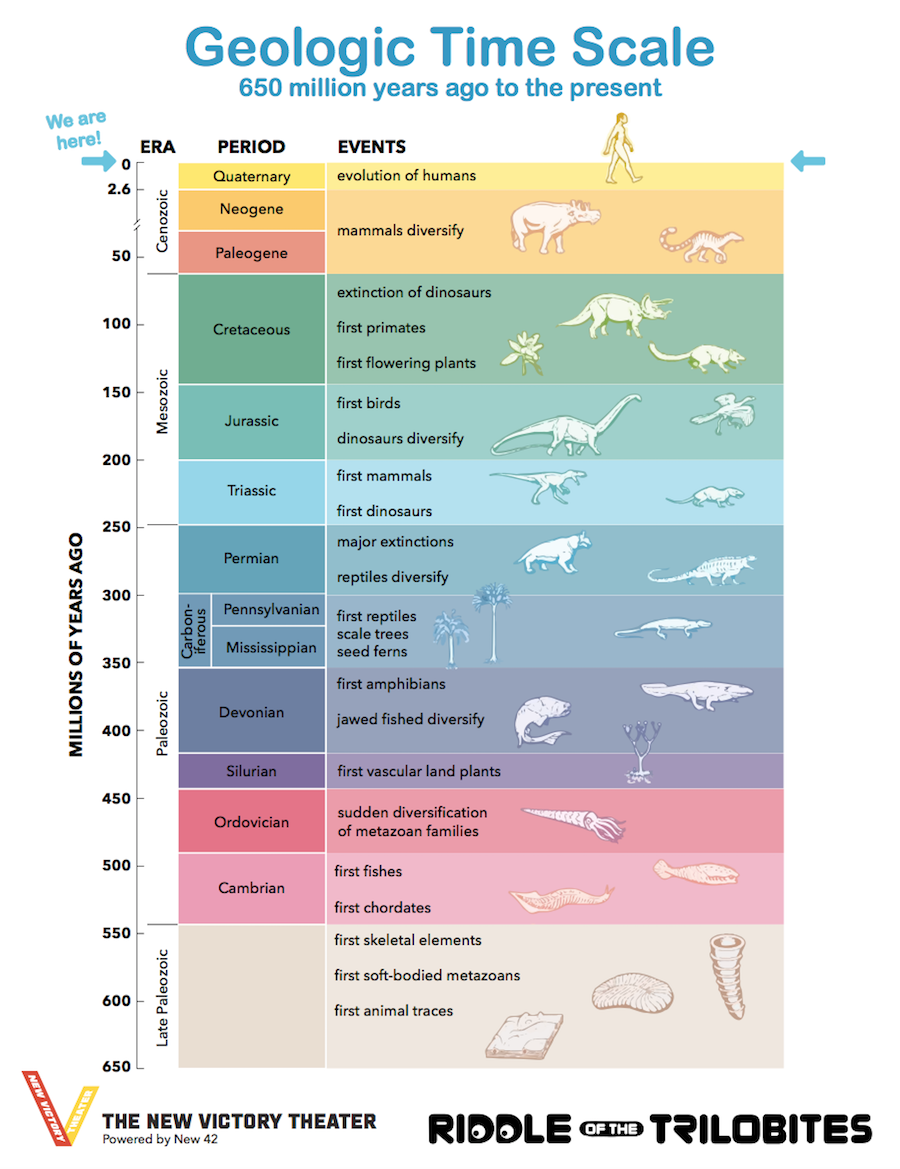 Trilobites went extinct hundreds of millions of years ago, but extinction isn’t only in the past. Today, humans are causing the temperature of the air and the ocean to increase too fast, making water levels rise and endangering many animal species. In this activity, learn about some of these animals, and commit to some ways that you can help keep them alive!

Whales are among the largest mammals on earth, but their very existence is threatened by rising water temperatures. Global warming is causing the ocean to become too hot for them to perform the necessary functions for their survival.

Migratory birds are in danger due to rising sea levels as the polar ice caps melt. Their nests and habitats on ocean coasts are becoming completely submerged. If this happens, they will have nowhere to breed or live.

Polar bears’ largest challenge is that the ice they live and hunt on is melting at a staggering rate of 4% per decade. Cubs are dying more frequently, and the ones who survive weigh less because they have to eat less.

These are only a few examples of the thousands of species that are threatened by climate change. But all hope is not lost! Your family can do its part to make sure things don’t keep getting worse. Small, individual actions are good first steps.

Step One: Print out our Sustainability Checklist. Read through the first section with your family and check off all the things that your household already does. Talk with your family about how and why you do these practices. How does it feel to do them? 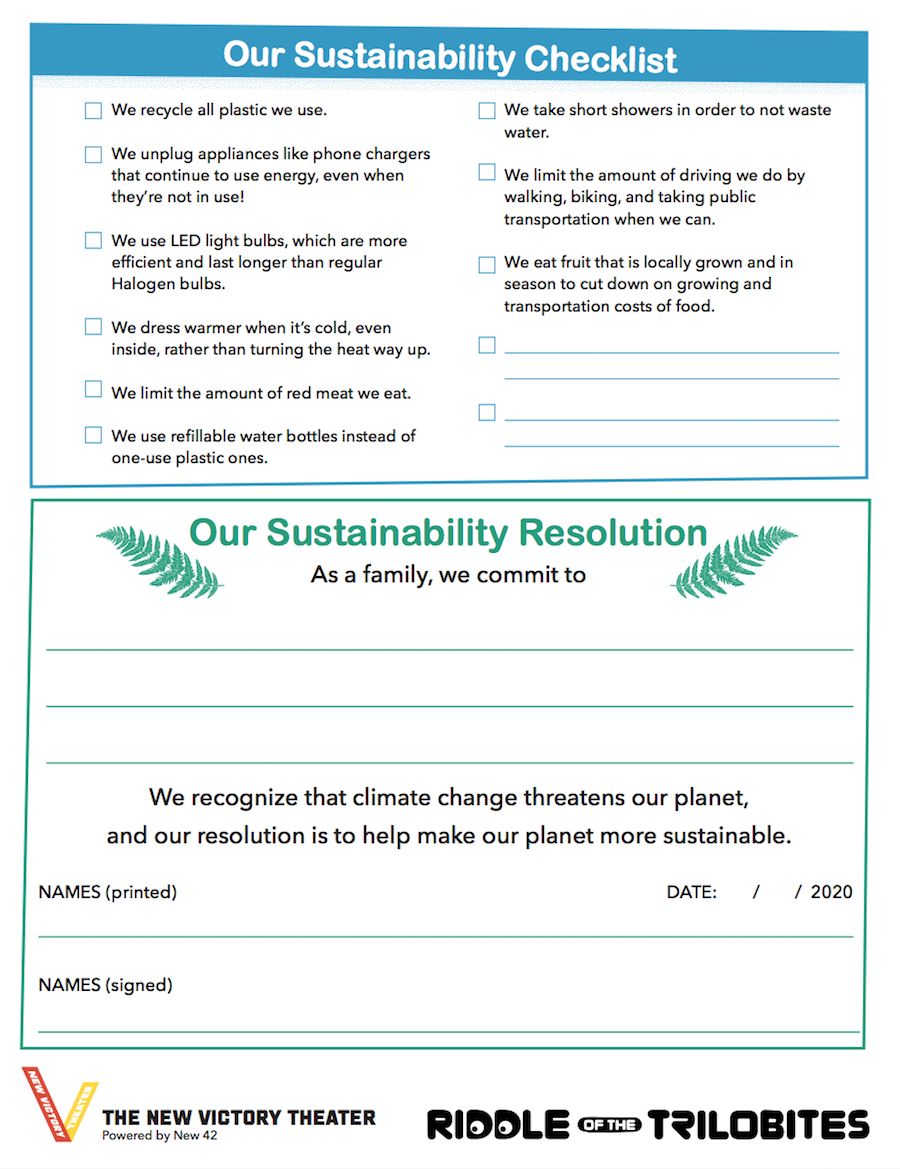 Step Two: Take a look at the statements that you didn’t check off. As a family, decide on one unchecked sustainability pledge that you can agree to try to add to your household practice. In the second section, fill in your pledge in the open space.

Step Three: Have every member of your family sign it and hang it somewhere that everyone can see, like on your refrigerator.

BONUS: Starting a commitment to sustainability in your home is a great first step, but there’s so much more to do!